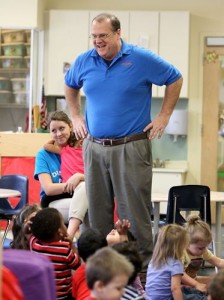 Here is a nice article that appeared in the TAMPA BAY TIMES about our owner ” Mr. Mike”.

Single dad enjoys Discovery Point daycare as much as kids

WESLEY CHAPEL — In a big, bright classroom at Discovery Point, more than a dozen 4-year-olds focused on their teacher — until Mike Keeney walked in. He smiled when he heard their whispers: “Mr. Mike!”

The students know Keeney — the single dad who keeps the daycare’s books, repairs the stuff that breaks and drives the bus — because he spends most of his time there. Keeney, 49, is also the daycare’s owner.

He, father to two girls, ages 22 and 5, opened the franchise in May 2006 and says the business is important to parents. He learned firsthand how valuable daycare is when in 1999 he and his then 8-year-old daughter moved from Daytona Beach to the bay area.

“There were very few options in Wesley Chapel 14 years ago,” he said. He needed a safe place for his daughter for before and after school, and for winter and summer breaks. It took three months to find a daycare. The experience was on Keeney’s mind when, after almost 25 years of working in the hotel industry, he quit his job as general manager of a Sheraton to open a Discovery Point.

Finding a daycare is not easy, said Stephanie Ray, 38, of Wesley Chapel, whose three sons — ages 8, 5 and 2 — are enrolled in Discovery Point. In her search, “we literally looked at every single daycare within a 20-mile radius. We pulled the records to see what their violations were and visited them all.”

Ray, who works full time as director of physician relations at a local hospital, and whose husband also works full time, picked Discovery Point when her now 8-year-old son was 1 1/2 because “it was very comfortable, very clean. It just felt right.”

“It’s a daunting thing to leave your children somewhere. It gives you peace of mind when you feel good about where you’re leaving them,” Ray said.

The center, which has about 230 children on its roster, serves ages 6 weeks to 12 years and is licensed to serve 233 kids. It is divided into eight classrooms by age range, three playgrounds — one for infants and toddlers, one for preschoolers and one for school-aged children — and a lunch room. The center provides transportation to and from school for school-aged kids and features a voluntary prekindergarten program.

“Our goal is to have our kids on a first-grade level by the time they are entering kindergarten,” he said.

Laci Garrett, 30, said the education the daycare provides her 3-year-old daughter is part of why she prefers Discovery Point.

“We follow a lesson plan and curriculum in all of our rooms,” Keeney said. The daycare also provides lunch, snacks and, according to Ray, love.

“Everybody in the building really loves these kids,” she said. “It’s really like leaving your children with family.”

The relationships Keeney builds with the families at Discovery Point are a highlight of the job, he said. Once, while on vacation, Keeney sat on a cruise ship’s lido deck.

“I hear this little voice scream ‘Mr. Mike!’ I thought, ‘there’s no way,’ ” he said. But it was a Discovery Point kid whose family had taken the same trip.

The boy ran to Keeney and hugged him. And that reaction isn’t unusual. At Discovery Point, kids line up for hugs when them see “Mr. Mike.”

“Bringing joy to a child is just what I find most satisfying.”