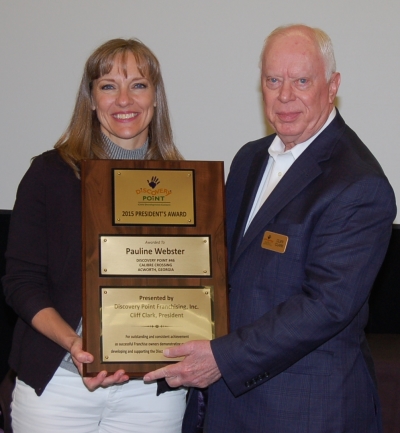 DULUTH, Ga. – Discovery Point Child Development Center, a leader in educational childcare, honored its top franchisees and centers at the annual Owners’ Summit recently in Atlanta. The franchisees were presented awards in recognition of their outstanding achievement throughout the year.

Franchisee Pauline Webster of Acworth, Georgia, was honored with the President’s Award in recognition of outstanding and consistent achievement as a successful center owner.

Salim and Andrea Karnaby of Odessa, Florida, received the Center of Excellence Award. The award is based on criteria that includes exceeding Discovery Point’s quality expectations as well as meeting state licensing standards, and demonstrating excellence in care and education. Points were awarded in each area with the Karnaby’s center, Discovery Point Suncoast Crossing, accumulating the highest honors receiving the Center of Excellence Award. 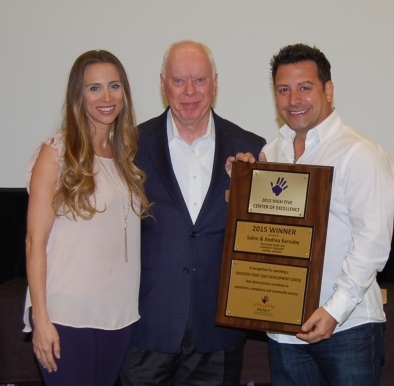 “All of our owners are winners, but these franchisees represent the core values that Discovery Point Child Development Centers represents,” Clark said. “Their passion and commitment is the reason we have continued to be so successful over the past two and a half decades.”

With almost 50 locations throughout the Southeast, Discovery Point Child Development Centers® provides safe, educational and nurturing environments for growing children. Discovery Point’s educational focus is learning through play, where learning activities are child-centered and build on each child’s natural curiosity. Discovery Point has a 25 year partnership with nationally recognized early childhood education program, Creative Curriculum System®, a research based curriculum that features exploration and discovery as a way of learning. Since opening its first location in an Atlanta suburb in 1988, Discovery Point has been a leader in childhood enrichment and care, expanding beyond its Georgia roots into Florida, North Carolina and Tennessee with plans under way to reach new markets nationwide. Discovery Point Child Development Centers® was recognized by Entrepreneur Magazine in its “Franchise 500” and ranked #22 on its “Red-Hot Franchise” list for 2013. More information about Discovery Point and Discovery Point franchise opportunities is available by visiting discoverypointfranchise.com or discoverypoint.com.


Get Started with Discovery Point


With a Discovery Point franchise, you can own a business delivering your own personal vision of quality childcare. Our business model offers a proven path to personal enrichment and financial independence, with the chance to work on your terms. At the same time, you’ll be generating positive change in your community and creating a better world for future generations.

Ready to learn more about our child care franchise opportunities? Complete this form to contact our team and take your first step toward owning a Discovery Point franchise.

Fill out our online form to learn more!