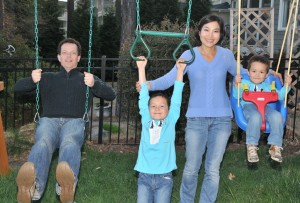 Ground was broken in March at 1212 Heritage Links Drive for what will be Discovery Point’s biggest child care center: 13,200 square feet capable of handling between 230 and 240 children ranging in age from newborns to grade school. The center will serve the Wake Forest, Raleigh and Rolesville areas starting in the Fall of 2014.

Discovery Point Child Development Centers is a leading network of childcare facilities throughout the southeastern United States. Operating on the “Three A’s” philosophy of “Attention, Affection, Approval,” the aim is to care for the children as if they were your own. The company focuses on creating an environment where children learn, play and develop intellectually, emotionally, socially and physically.

The center will include separate playgrounds for infants through older children, Jan says, adding he hopes to open in the month of September.

Jan, 44, is switching careers after 16 years as a top executive for global planning at the biotech firm Novozymes. Why? Because a corporate restructuring there would require a return to his native Denmark. He and his wife, Hong, 35, decided they would rather stay and raise their family in Wake Forest.

“We really like it here. We have a lot of friends, the climate around here,” Jan says. “We’re not ready to go back to Denmark. We’d like to stay.”

They’re first-time entrepreneurs, but veteran adapters. Jan is from Denmark, Hong from China. Their son, Felix, was born in Denmark but has lived in the United States for most of his life. His brother, Victor, was born here. “When we go through customs, we bring passports from three different nations as the same family,” Jan says.

Hong, began staying at home after Felix was born. But she will be active in the new center. As will their sons, who will be among the children enrolled there.

“We want to leave a legacy and believe we can do that through very high quality child care,” Jan says. “It has been my dream since I was a kid to have my own business.”

Given their corporate background and the success rate of franchises versus stand-alone businesses, they knew they wanted to franchise, Jan says, adding they looked at several franchise options, but chose child care because it’s an opportunity to create a legacy and the strong, ongoing demand for it among Wake Forest’s growing population.

They chose Discovery Point “for their high-quality setting combined with an interesting flexibility into it” allowing for local conditions and local franchisees’ chances to make an impression in their communities.

“We want to be the best child care facility in the area,” Jan says. “We want to simply be top of the class. This is a legacy and quality is more important than money in this case.”

Discovery Point was founded in 1988 by Cliff and Diane Clark. They built Discovery Point on the fundamental belief that children thrive in an environment rooted in love and nurturing. Discovery Point began franchising in 1991, and currently has 55 locations in Georgia, Florida and Tennessee. The company made Entrepreneur Magazine’s “Top 500 Franchises” for 2011 (No. 290), and for more information, visit www.discoverypoint.com.


Get Started with Discovery Point


With a Discovery Point franchise, you can own a business delivering your own personal vision of quality childcare. Our business model offers a proven path to personal enrichment and financial independence, with the chance to work on your terms. At the same time, you’ll be generating positive change in your community and creating a better world for future generations.

Ready to learn more about our child care franchise opportunities? Complete this form to contact our team and take your first step toward owning a Discovery Point franchise.

Fill out our online form to learn more!